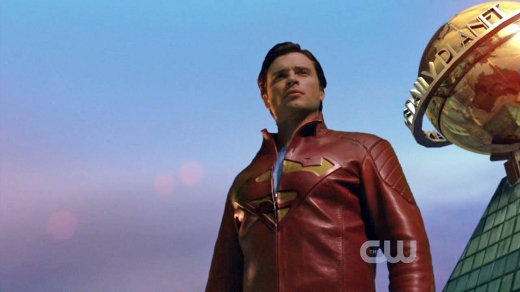 I want to start this off, by saying for the better part of the last decade, I freaking HATED Smallville. Why? well as you may or may not know, i love comic books, and while I’m not a fan-perse-of Superman-I do have alot of respect for the character, and I truely see his symbol as more than just a comic book character symbol, more than pop art. This was the kid, who was in first grade in 1992, and whose father stood in line at a local comic book shop to pick me up a copy of Superman #75.  This was the kid who went into school the next day, after recieving, reading, and crying over that very issue-with a makeshift black “memorial armband” with a white out drawn Superman logo on it. Yeah, call me a mark.

I agree with a good portion of the world, when they say the Superman symbol as become a beacon of hope for people. I remember still being an impressionable youth in High School, and seeing 9/11 Rememberance posters with a red S emblazened emblazened on them. I didn’t find it offensive, I found it as a recognizable symbol of hope, that things will get better (of course whether or not they HAVE gotten better is a WHOLE different blog.)

I watched the first season, season and a half-ish of Smallville, hoping to get a prime time live action television show that respected the comic book material-just like “Batman: The Animated Series” and its subsequent folow up series, “Superman: The Animated Series”, “Justice League” and “Justice League Unlimited” had.  I understand that every new medium will take liberties with a character. After all, thats how we got rubber nipples on the Batsuit. There’s a thin line between “taking liberties” and “completely pissing on the source material“. By the middle point of Smallville S2, I had figured out which way “Superboy without the costume” was going….and it involved urination.

So I stopped watching. I refused to watch, and refused to even acknowledge the atrocity of epic proportions that was airing every week on network television (besides WWE Monday Night RAW of course) that people called “Smallville”.  I mean sure, it got great reviews, and overall-was accepted by the fans, but call me a purist. I like my Batmen dark and brooding-and my Supermen not giant vaginas.

I read alot of hype about the 2010 tv movie, “Absolute Justice”. The 2 parter from Smallville that was aired together in the middle of Season 9. So, after several years of completely NOT caring about the show. I decided to tune in, and was hooked. I watched the rest of the 9th Season, and sat patiently for Season 10 to premiere. The hint at the end of Season 9 was EPIC, and I couldn’t wait to finally see Superman on the small screen again.

Fast forward, Season 10 of Smallville has begun, and we are two weeks in. This is where the real fun begins. The season premiere, LAZARUS, was a definant kick starter, as Lois finally-beyond any shadow of a doubt-figured out that Clark is Superma—erm. “The Blur”. She finds him laying in a puddle of water-with a shiny blue kryptonite knife in his chest. She pulls it out, cries over him in a scene that felt too close to the big final page spread in “Superman #75”, and sits as she watches Clark heal himself in a ray of sunlight-after throwing the knife away. If she didn’t figure it out by that time, than she is the single dumbest human being on the face of the planet.

We find out who kidnapped Ollie (Green Arrow) at the end of Season 9. Well, at least we built on what we already knew. They weren’t Kandorians.  We don’t know EXACTLY what actually swarmed and attacked him. The internet things they range anywhere from old Cadmus / Checkmate tech-to Darkseids Parademons (which would make a fuck more sense, given later revelations). Ollie is strapped to a chair. Naked. and getting the SHIT kicked out of him by Rick Flag of the Suicide Squad. Fun little torture sequence, that made you really like Ollie as a smart ass, and hate Flag for being a dickwad.

Clark goes to meet Lois in the barn, and theres a big black box on the table. Lois has already snuck a peek-but now Clark gets to see whats inside….

The costume from SUPERMAN RETURNS! Whodathunkit?!

Before Clark can take it out, and become the “hero he’s meant to be”, he’s warped away by Zordon Jor-El-who proceeds to be the biggest douchebag in Super Hero history. He berates Clark, telling him the great DARKness that’s coming isn’t Zod, it’s him. That Kal-El would be Earths greatest threat-not Earth’s Savior. Seriously, Jor-“Zordon”-El went from pepping up teenagers with attitude, to berating pre-hero heroes in trenchcoats. What the fuck?

soapbox moment here. SUPERMAN IS A DEMIGOD. THE MAN CAN CRUSH YOUR FACE WITH HIS PINKY. WHY IS HE WASTING HIS TIME WITH A MANIACAL SOCIOPATHIC RICH GUY, WHEN HE COULD BE CAUSING MILLIONS OF DOLLARS IN PROPERTY DAMAGE FIGHTING VILLIANS LIKE DARKSEID, MONGUL, BLACK ADAM, OR ONE OF THE SUPER VILLIANS IN THE DCU WITH FUCKING SUPERPOWERS?!?!?! All the while, Batman-who is James Bond in a batsuit, has to fight fucking ninjas, psychotic clowns, steroid abusers, a dude who freezes things, nd a giant humanoid alligator man guy thing. What the hell? [/soapbox]

Moving on, the episode closes on a cloud of black smoke hovering out from a tower-and the smoke forms the head of DARK-fucking-SEID. IT’S ON NOW!

Wait…I get it now. The smoke monster from Lost was DARKSEID! IT ALL MAKES SENSE NOW!

Episode 10×2, SHIELD-was less action orientated. We had the show dominated by Cat Grants arrival-and to be honest, if I was Clark, i would of crushed her skull in the blink of an eye within seconds of meeting her. Clark spent most of the episode as her human kryptonian shield, as they were being stalked by the debuting Deadshot. The bastard love child of awesome and Jonah Hex? Whatever.

The bulk of the episode is the exposistion between a desert clad Lois Lane, and her baby sitter-Carter Hall. Carter knows that Lois knows that Clark is oblivious to the fact that Lois knows he’s Superma………The Blur…..He explains the whole Hawkman / Hawkgirl gimmick, about being star crossed lovers. Lois calls Clark “Ra”, after seeing him be “reborn” by the sun last episode (way to tie shit together!).

After Cat Grants car is blow’d up and she almost get’s “Venom’d” (DAMN YOU DEADSHOT! YOU FAILED ME AGAIN!), Clark becomes her unofficial bodygaurd-allowing her to stay at Chloe’s apartment (which Green Arrow happens to be investigating). Cat confronts Arrow, and accidently spills her tip about “heroes torturing people at the docks”. Ollie-being the Smallville equivelent to Batman, uses this information, and hops out the window-heading for vengence.

Deadshot finally gets Cat and Clark in his little death trap, but Clark decides to “step out into the light” and punch him in the face, and be the human shield for her. The bullet hits him, and a weird poison symbol burrows into his skin. Wonder what that means?

No real hint at Darkseid in this episode, but we do get another great paning shot to close the episode. This one? Clark Kent in his new “I’m Coming Out of the Closet Shadows” costume. A read Daredevil-esque leather jacket with the S shield embroidered into  it (see picture at top of the page for a photoshop)

It leads me to my next question: WHO THE FUCK DO YOU GET TO EMBROIDER A VIGILANTE SYMBOL INTO A RED LEATHER JACKET WITHOUT LOOKING SUSPICIOUS? Alfred?

Overall, Season 10 has come out the gate with guns blazing. The slow burn tease to the full Superman costume is  tantalizing-if not tortorous, and seeing them essentially use Green Arrow as Batman is fun. Although it makes me with we really had a chance to see the “Worlds Finest” team up on Smallville. I can not WAIT for Darkseid, and if the rumors I read are true-than we might not be as far away from it as we think. I’ve read he should be in costume by the mid season.