So, we have our latest DC Universe Animated movie released this month, in the long awaited “Batman: Year One“. Which is a review we will get to later.

END_OF_DOCUMENT_TOKEN_TO_BE_REPLACED

So I appeared on the newest episode of the NerdyNothings.com Podcast with Eric and Davin. We talked about The New 52, Tokusatsu, DC Animation, played a hillarious game of “Quotes”-and so much more. Had a blast with these guys, and I hope to be apart of the show again.

Check it out after the break!

END_OF_DOCUMENT_TOKEN_TO_BE_REPLACED 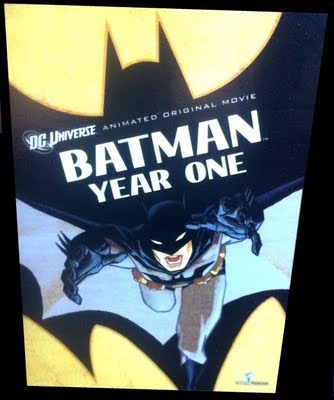 So, I decided to FINALLY crack open my copy of “Green Lantern: Emerald Knights” today, and sit down to watch it for review. Before getting to that, I decided to check out some of the bonus features-and the first thing that I hit was the preview for “BATMAN: YEAR ONE“. The next film in the DC Universe Animated Movie line-which will be released Summer 2011 (because Warner Brothers cant go a year without SOME TYPE of Batman Release…2010 saw Batman/Superman: Apocalypse AND Batman: Under The Red Hood. 2011 will see Batman: Year One (at least). 2012 will see The Dark Knight Rises. Maybe in 2013 we can get the 20th Anniversary (HOLY CRAP ON A STICK BATMAN!) 4 Disc Collectors Edition Extended Super Awesome Collection of Batman: Mask of the Phantasm on Blu Ray? Huh huh? Maybe? Maybe? Please Warner Brothers….I know you’re reading this…..

“Batman: Year One” is of course based on the Frank Miller four part story, that re-imagined the tragic origins of The Dark Knight. It was used as source material for Christopher Nolan’s “Batman Begins”-and is regarded as THE definitive Batman origins story…

so lets delve into the PREVIEW of “Batman: Year One” – available on DVD / Blu Ray Summer 2011 from Warner Home Video, and DC Entertainment…..